Home/Entertainment
10, Dec 2018 2 Comments 51701 Views
Ty Dolla $ign's staring down the possibility of more than a decade in prison now that a grand jury's indicted him on drug charges that include felony possession of cocaine.

Mind you, this went down in Fulton County, GA where drug laws are way stiffer than Cali. If convicted, he could get up to 15 years in prison. 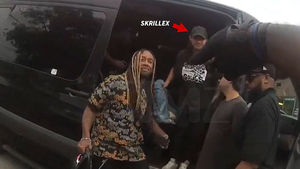 TMZ broke the story ... Ty Dolla was busted by copsin Atlanta who allegedly found drugs in his bag. His arrest was a pretty crazyscene -- drug dogs were barking like crazy before cops slap the cuffs on Ty.

Before that, cops paraded his entire crew -- which included Skrillex that day -- outta their limo van and searched them. Ty was the only one who got busted.