Home/Others
06, Apr 2018 3 Comments 88847 Views
One of the world's most famous actors, Dwayne 'The Rock' Johnson, has been seen 'wrestling' an alligator in new photo. 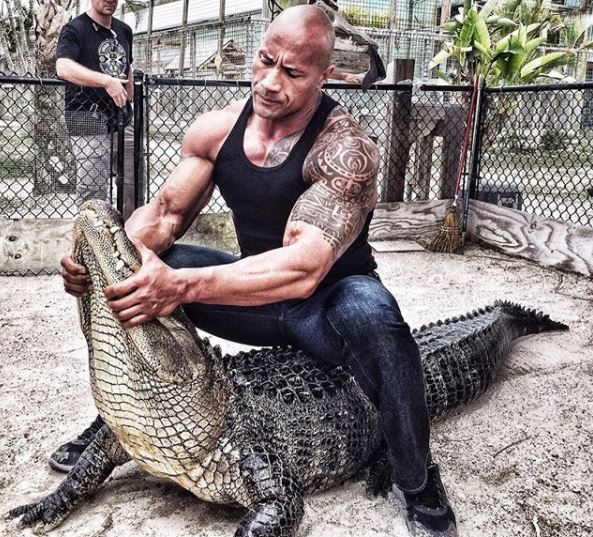 Dwayne 'The Rock' Johnson looked every bit the hard man as he wrestled a live alligator. The wrestler-turned movie star posted a snap on Instagram of him straddling a giant 'gator.

With his famous biceps bulging, The Rock gripped the killer beast's powerful jaws shut with his bare hands as he squatted over him in a tight black vest and blue denim jeans.

The Rock is currently promoting his new movie Rampage, which is loosely based on the 1986 computer game of the same name.

It tells the story of a man who teams ups with a giant silverback gorilla to fight mutant wolves and reptiles.

Under his picture, Dwayne wrote: "Gorillas weren’t the only animals I spent time with for my RAMPAGE research."

Luckily, I’m a country boy who lives only a few miles from the swamps of the Florida Everglades."I do a lot of fishin’ and truckin’ down here and these gators are some of my favorite fresh water species."

They’ve been rompin’ and chompin’ for 37 million years. Incredible animal.. especially once I’m able to calm ‘em, then I’m really able to appreciate up close."

He added: "Important legal disclaimer: If you come across a gator, don’t try doing this."

You’ll lose a limb or something much worse. Call the Fish and Wildlife Commission or world star."

But his tough man antics didn't win over his Jumanji co-star Kevin Hart, who couldn't resist getting a jab in on his film-star pal.

Kevin commented: "So I guess we're done doing movies together...I say that because if you're doing stupid s*** like this you're gonna die soon."