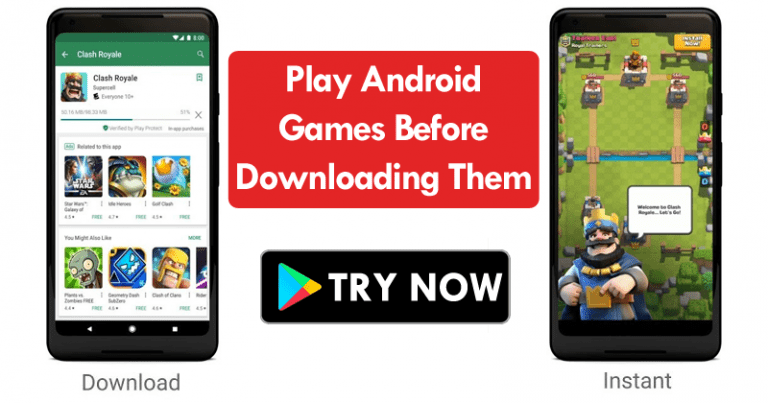 You probably already downloaded some game for smartphone, and soon regretted that it did not please you. However, now according to the latest reports, the tech giant Google is now preparing a way to test Android games without heavy downloads, and without even an installation process.

This is Google Play Instant. Basically, you can go to the Play Store, choose a game, touch the “Test Now” button and you’re done. This has also been integrated into the Play Games app in the “Arcade” section.

I experienced this with Clash Royale, and loading was pretty fast. The “Instant App” screen appears for less than two seconds; nor gave time to print the first time. It is possible to play some stages and, if you are interested, there is a button to download the full version.

In addition to Clash Royale, you can test Google Play Instant with Final Fantasy XV: New Empire, Words With Friends 2, Bubble Witch 3 Saga, Mighty Battles and Patience (from Zynga). This technology is still in closed beta for developers; if you are interested, complete this form.

All of this may sound very familiar, as last year, the tech giant Google finally released Instant Apps for Android. They also do not require installation; you can try out some of them here https://play.google.com/store/apps/collection/promotion_3002d0f_instantapps_featuredapps. This is not web apps; they run natively and work only on Android with Google Play Services.

The tech giant Google explains to The Verge that it has expanded this gaming technology as well; you had to upgrade some APIs to work better with OpenGL. The company is also working with Unity and Cocos to facilitate the development for Play Instant; this will be released later this year.

The instant version of a game needs to weigh less than 10 MB. This works well for some simpler titles, such as Bubble Witch, but it’s a strong limitation for FFXV – you fight a creature for less than a minute, and you’re invited to install the full version.

To turn this feature on or off, go to Settings> Google> Instant Apps. It will only appear if your phone is compatible.