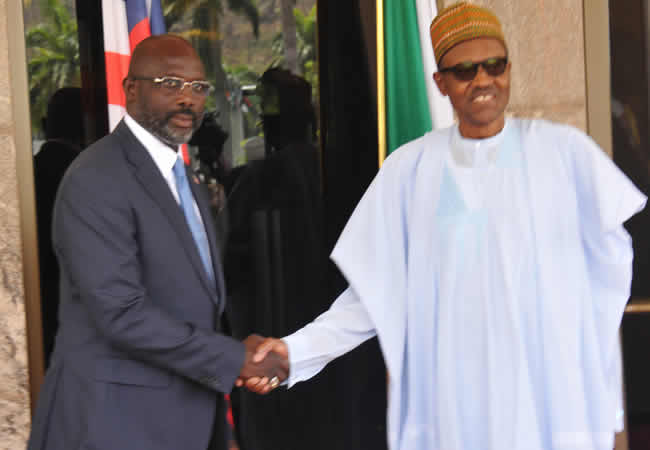 Weah said this while addressing State House correspondents at the end of a meeting he had with President Muhammadu Buhari at the Presidential Villa, Abuja.

He said he was in Nigeria on a mission of gratitude and respect for the roles that Buhari and Nigerians have been playing in maintaining peace and stability in the West African sub-region and particularly in Liberia.

He said although Nigeria’s economy was the largest in Africa with the most powerful Army in the sub-region, the country has never used your wealth and military prowess to expand its territory, threaten its neighbours, or destabilise any sovereign nation in the region.

He said Liberia needed Nigeria’s support to JumpStart its economy.

Weah said, “The prices of our two basic export commodities-rubber and iron-ore continue to fall on the world diminished market.

“Youth unemployment is at an all-time high, and prices of basic commodities continue to increase.

“Our people have voted for change, and for hope.

And change is finally here.

But mere political change is meaningless without development, prosperity, and growth.

“We need Nigeria’s help to jump-start our economy.

You played a major role in bringing peace to Liberia, you reformed our Army and today it is performing its duties to the highest professional standards.

“As we speak, they are serving in a peace-keeping mission in Mali. You have also built and expanded the capacities of Liberians in so many ways.”