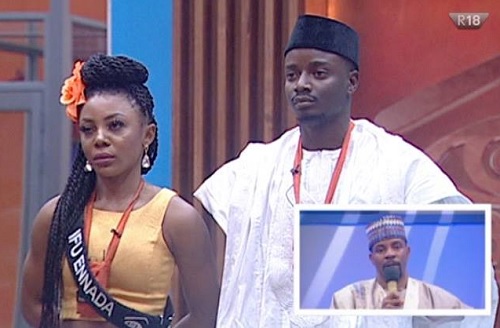 On the heels of the mild commotion caused by Ahneeka and Angel’s Eviction on Sunday night, Biggie announced the winners of the Roc Da Mat challenge as Ifu and Leo.Biggie had already earlier tried the duo, as they had survived eviction after being nominated and were still recovering from the shock of having been narrowly spared the exit fate.Hence it came as a surprise to see Ifu uttering praises with clasped hands upon hearing that their pair were not evicted.

It was only a short respite for Ifu and Leo who were sent on another rollercoaster of emotions upon hearing they had won the "Pepsi Roc Da Mat" prize that included N5million as well as the VIP trip to London, and one year supply of Pepsi and Aquafina water.

If anything, Leo and Ifu had earned this prize, and deserved all the credit for their efforts. Ifu couldn’t contain herself and literally jumped around joyfully shouting and laughing before throwing herself into her partner, Leo's arms to celebrate.

It was as if she was finally vindicated, and that her stay in the House was worth it.

Leo on his side though less inclined to demonstrate emotions looked genuinely carried away.

Housemates were prompt to gather around them and congratulate them for snatching such a victory. The smiles looked authentic, yet some teeth were grinding as Anto and Lolu for instance appeared detached from the moment. Against all odds, even Alex who had nominated Leo for a corny haircut story instantly warmed up and was seen hovering around him again.

She had tossed him aside like an old sock. Perhaps learning that Leo was now a winner rekindled her flame or was it the sleek haircut that revived her passion?