What God Told Me About Buhari, Super Eagles, Igbo Presidency, Others - Bishop Eze Releases His 2018 Prophecies

Home/Others
11, Jan 2018 1 Comments 65313 Views
Bishop Okwudili Eze, has released his 2018 prophesies which carries what God told him concerning the super Eagles, the Naira, All Progressives Compress, the Peoples Democratic Party and the Igbo presidency. 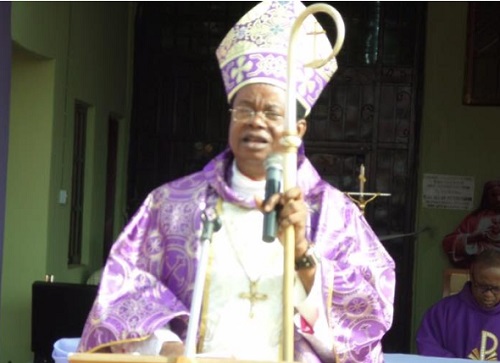 Founder and General Overseer of the Zion Heritage and Miracle Ministries, Bishop Okwudili Eze, has revealed what God told him about 2018.
Bishop Eze’s revelation carries what God told him concerning the Super Eagles of Nigeria, and the 2018 World Cup in Russia; the Nigerian currency, the Naira; Nigeria’s leading political party, the All Progressives Compress, APC; the Peoples Democratic Party, PDP; and the much talked about Igbo presidency.
The cleric also made predictions concerning mysterious assassinations of political heavyweights in the country. He talked about a clash between the Governor of Kaduna State and a former Governor of Lagos State and national leader of the APC, Bolaji Ahmed Tinubu.
He also warned that the Governor of Abia State, Okezie Ikpeazu, may lose his mantle as the governor of the state to the APC.
Read full prophecy below:
*******************
“There shall be some signs of economic recovery in Nigeria not because of the government policies but because of the mercies of God that he wants to pour afresh on the nation because of the elect.
“A golden era shall open for the super eagles in 2018. If they connect to hard-work and discipline, their glory days are here. There is grace on them for mega global impact.
“The naira shall gradually begin to recover in value and its worth, will soon be appreciated by the citizens and global market.
“APC shall experience internal party crises that may split the party into two opposing factions. The common bond that brought them together shall begin to break. I see a great break away. El-rufai camp versus Tinubu camp.
“Nigerians should pray against the spirit of sudden and pre-mature death amongst her citizens. Destructive rainfall and flood should be prayed against. Increase in organ diseases amongst Nigerians must also be prayed against.
“Mysterious assassination and unexplainable road accidents must be prayed against.
“Igbo presidency in 2023 is divine and ordained by God. However, the Northern Oligarchy is having headache concerning the Igbo man that they can entrust with power who will not tamper with the present power structure and be loyal to them.
“All the Igbo sons who are secretly positioning for the post shall be disappointed for God has prepared a David with a rod of Dominion to rule for him in 2023. If the north tampers with this divine agenda, they can’t contain the restiveness that would shake the land.
“Governor Ikpeazu should pray seriously that the rulership mantle does not depart from him. There is a great conspiracy by power brookers to replace him by all means. Should Abia state be governed by APC?
“If PDP shall hearken to the call for internal party restructuring and to give the younger generation a chance for rulership, the lost glory of the party shall be restored.
“Scandal of corruptions looming on some of President Buhari’s ministers. A strong wind that would open the buttocks of the fowl is coming heavily. I see sudden ministerial shake up mid-year.
“The hand of judgement shall come heavily on kidnappers, those selling human parts and pedophiles mightily and their sponsors massively exposed and dealt with.
“The dividends of jubilee shall begin to manifest on the Igbo nation. A lot of Igbo sons and daughters shall begin to come into unusual prominence and limelight in the committee of nations. And the enemies that have plagued them for years shall be humiliated before them and their strength depart from them forever.
“The elements and forces of life shall fight those who would gather to resist the visitation of God on the seeds of covenant. Great leaders, discoveries and trans-generational impact shall begin to spring out of the Igbo nation to other nations.
“Biafra is not a physical dominion but a mental, philosophical, economical and spiritual dominion.”