Many famous actors and musicians are big fans of fine cigars. If you’re looking for a new cigar brand, or you are just curious about all of the hype, check out what these top celebrities are choosing to smoke. 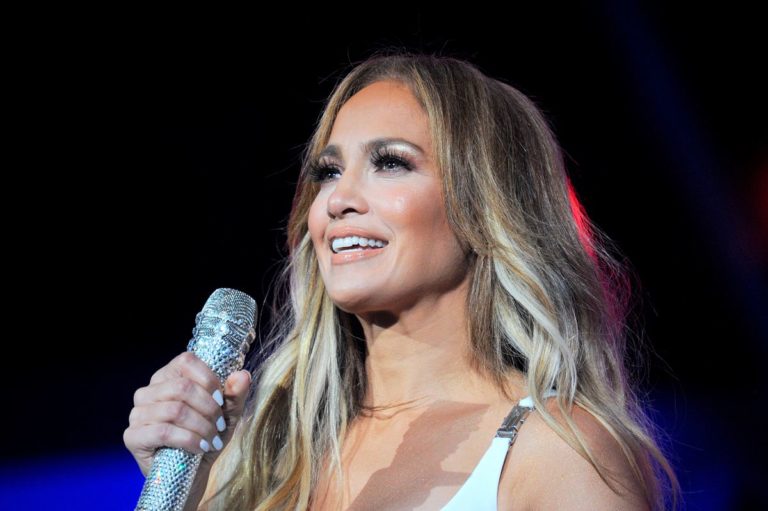 J-Lo shows cigar aficionados everywhere that cigar smoking isn’t just a man’s game. The singer, dancer, and actress has stated in previous interviews that she began to enjoy cigars when she was around 19 years old, influenced by her father, who was a regular cigar smoker.

As a long-time cigar smoking enthusiast, Lopez even keeps a Dunhill humidor in her home that can house up to 80 cigars. So, what is her favorite brand? You might be surprised to hear that her preferred cigar brand is the popular Macanudo.

Macanudo cigars are renowned for their mellow flavor profile and often recommended as the perfect introduction to the cigar-smoking world. The lush Dominican tobacco is tightly rolled inside a premium Connecticut Shade wrapper that is fermented using Macanudo’s unique “winter sweat” method. This fermentation process gives Macanudo cigars their characteristic smoothness. 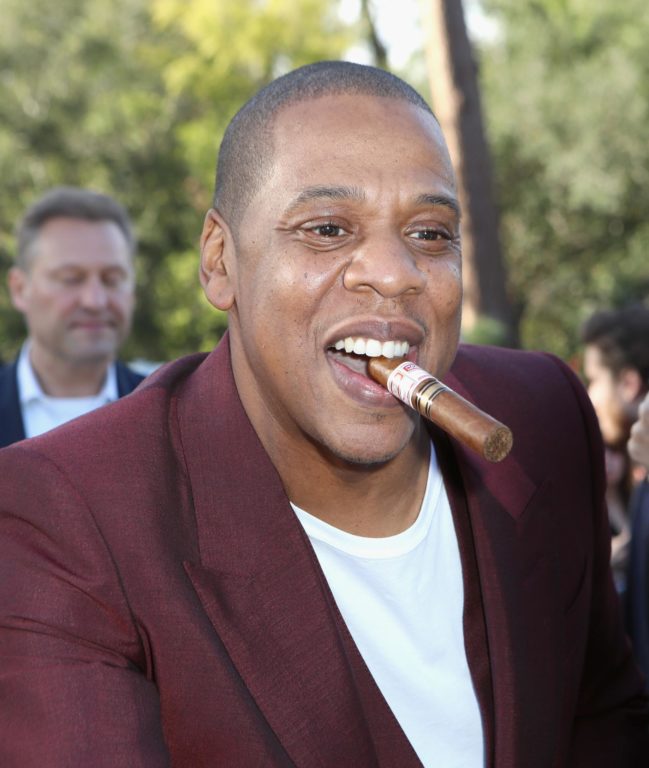 Music mogul Jay-Z built his empire with a cigar in his hand. He has appeared on the cover of Cigar Aficionado and even built a Gentlemen’s club backstage, well-stocked with whiskey and fine cigars to enjoy while on tour with Justin Timberlake.

Jay-Z has collaborated with some of the biggest names in the music industry, but perhaps his most exciting collaboration to date is with Cohiba to create the Cohiba Comador.

The Cohiba Comador was released in 2014 as a limited run and was only available at select retailers and online. The exclusive Comador comes with a hefty price tag, with a box of seven costing over $200. You can also get the cigars in two different boxed humidor sets: A Spanish cedar travel humidor and a pebbled leather linder humidor.

Jay-Z was involved in every step of creating the Comador. He helped select the seed from heritage Cuban stock and oversaw the fermentation of the Connecticut-farmed tobacco in Dominican rum barrels. The resulting cigar is a super-sized, flavorful smoke that has notes of dried fruit, cocoa, and aromatic wood.

Sylvester Stallone has been a long time devotee to cigar smoking, beginning before he found fame with the Rocky film franchise and become one of the world’s most famous action stars. Beyond his love of the fine leaf, Stallone has been known to say that he enjoys the culture and camaraderie surrounding cigar-smoking just as much as the smoke itself.

Over the years, Stallone has refined his palate and now enjoys more premium cigar blends. Among these includes Cigar Aficionado’s Cigar of the Year for 2005, the Fuente Fuente OpusX, which Sly frequently claims as his all-time favorite cigar.

The Fuente Fuente Opus X is a masterpiece in cigar-making, and it is easy to see why a tough action star like Stallone would be drawn to its complex flavor profile and full-bodied smoking experience. Rolled entirely from Dominican tobacco leaves, the flavors include rich leather, red pepper, cocoa, and spices. 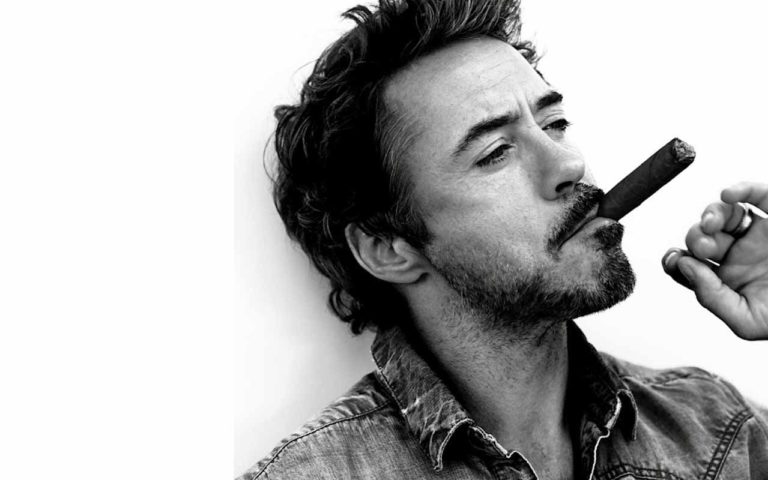 There is no doubt that cigars give the smoker an effortlessly cool vibe, and even Iron Man regularly enjoys smoking a fine cigar. Robert Downey, Jr. is frequently photographed with a cigar in hand and has been heard to say that his preferred smokes are Montecristo #2 and Gurkha Grand Reserve.

Montecristo #2 cigars are almost as famous as Downey, Jr. himself, and are among the finest Cuban cigars on the market. The tobacco used in the Montecristo #2 is grown in one of the most stunning places in Cuba, Pinar del Rio. The full-bodied smoke of the Cuban Puro offers a flavor profile that includes pepper, almonds, and cedar, then develops notes of cinnamon and leather at the back third.

Gurkha Grand Reserve cigars offer something a little different for the discerning cigar enthusiast. The Dominican tobacco and Connecticut wrapper are infused with Louis XIII Cognac. When you light up, you get the sweet syrupy aromas of this cognac combined with the woody notes of the tobacco. 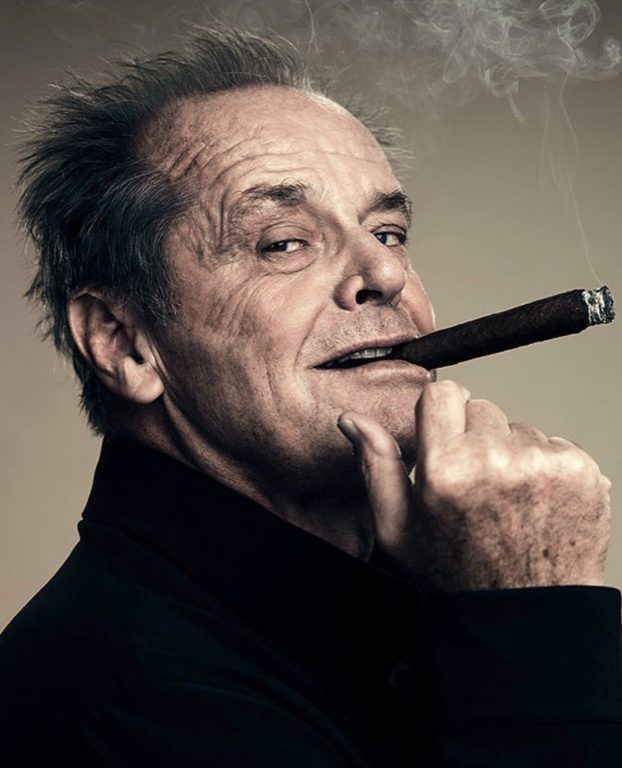 Possibly the most iconic cigar-smoking celebrity is Jack Nicholson, whose love of fine Cuban cigars is legendary. He has appeared on the cover of Cigar Aficionado and regularly incorporates cigar-smoking into some of his on-screen characters.

What started out as a way to quit cigarette smoking turned into a lifelong love of Cuban tobacco for Nicholson. Some of his favorite cigars brands include Romeo y Julieta, Cohiba, and Montecristo, but he also has a fondness for the Dominican brand Macanudo.

While he by no means considers himself a connoisseur, the film legend does take pride in smoking and storing his cigars properly using a professional humidor.

You don’t have to be a celebrity to enjoy the powerful flavors and intoxicating experience of cigar smoking. If you want to try out some cigars loved by the rich and famous, you can find fantastic Swiss Cuban Cigars online at affordable prices.