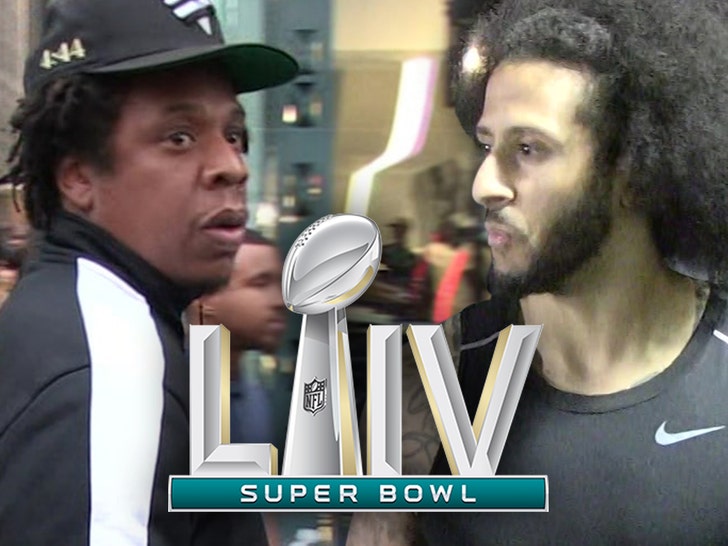 Jay-Z is once again explaining why his partnership with the NFL is actually for the same cause Colin Kaepernick fights for ... it's just the approach that's different.

Jigga sat down with the NYT this weekend ahead of Super Bowl LIV and re-defended his collaboration with the league, which many saw as a betrayal of Kap and everything he stood for. Jay also took a lot of heat at first, but he seems okay with it for the bigger picture.

He tells the paper, "As long as real people are being hurt and marginalized and losing family members, then yes, I can take a couple rounds of negative press," going on to insist he is still fighting for people of color -- only now, from a position of strength and influence. Case in point ... Sunday's broadcast will apparently include a PSA-type video -- one in a series, per NYT -- that aims to tell the stories of black men and boys killed by cops.

It'll probably be similar to the PSA Malcolm Jenkinsand Roc Nation teamed up to produce, which was called "Everyone's Child." Unclear if this new vid is part of the same" Responsibility Program," but chances are it falls under the same umbrella.

Getting back to Kaepernick though, Jay kinda sticks to his guns in this new interview as far as addressingthe guy's situation... acknowledging he was done dirty by the league, but also strongly suggesting it's time to move forward and start looking for new solutions.

Jay says, "No one is saying he hasn’t been done wrong. He was done wrong. I would understand if it was three months ago. But it was three years ago and someone needs to say, ‘What do we do now -- because people are still dying?'" He adds of Kap, "We are two adult men who disagree on the tactic but are marching for the same cause." CK, meanwhile, doesn't appear to see things the same way.