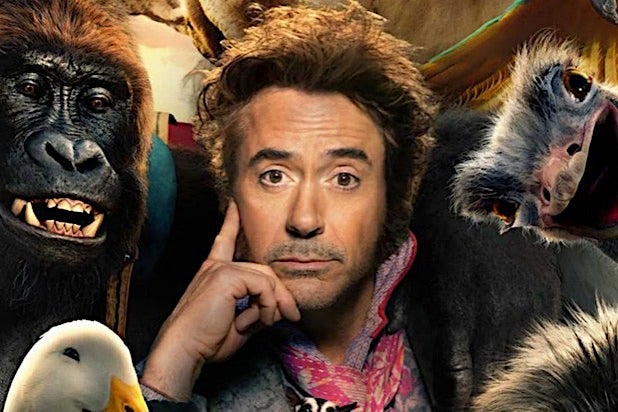 Universal made a big investment in “Dolittle,” but the adventure comedy is going bust at the box office with a 4-day domestic opening weekend of $30 million and a global opening launch of $50 million. Based on a reported production budget of $175 million, multiple film finance experts tell TheWrap that they currently project a loss of $100 million for the project starring Robert Downey Jr. in his first film appearance since “Avengers: Endgame.”

That would be an even bigger loss than Universal’s other flop from December, “Cats,” which became joke fodder for online film circles, but at least had a smaller budget of around $90-95 million, which kept its financial loss estimates at around $70 million.

There is still a small possibility that “Dolittle” could find an overseas bailout. The film has yet to release in more than 20 markets, including nine more next weekend, France and the U.K. in the first week of February, and China on Feb. 21.

If those markets overperform, it could help “Dolittle” get closer to breaking even, with one analyst telling TheWrap that China has a decent chance to “upend the calculations.” A somewhat similar case happened with Disney’s “Maleficent: Mistress of Evil” last fall, grossing less than half of what the original “Maleficent” made in North America at $113 million, but was able to make a modest profit thanks to $377 million grossed overseas for a $491 million total against a $185 million budget.

But to do so, “Dolittle” will have to overcome poor reviews, as critics have given the film an 18% score on Rotten Tomatoes. Common points in the negative reviews included the CGI work on the film’s animals, as well as a script more focused on kid humor than story. Audience reception has not been much better with a B on CinemaScore and a 3/5 on Postrak from primarily family audiences.

This is a case of box office history repeating itself. Back in 1967, the first adaptation of Hugh Lofting’s “Doctor Dolittle” novels starring Rex Harrison went over budget and required several reshoots, resulting in a box office bomb that infamously earned a Best Picture nomination at the Oscars after heavy politicking from 20th Century Fox.

In a similar fashion, reports have surfaced on this new “Dolittle” going over budget thanks in good part to reshoots to make the film more family friendly. And while the film’s domestic opening is consistent with live-action family comedies released in January like “Paul Blart: Mall Cop,” it is now expected to end up alongside adventure films like “The BFG” and “Jack the Giant Slayer” as adventure/fantasy films that struggled to recoup their $100 million-plus production costs.

While hindsight might be 20/20, “Dolittle” was a project that was in hot demand among studios when CAA packaged Downey Jr. and director Stephen Gaghan for an adaptation of the Lofting novel “The Voyage of Doctor Dolittle” back in 2017. Downey Jr. was in the midst of five consecutive annual appearances as Iron Man in the Marvel Cinematic Universe, which ended last year with “Avengers: Endgame.” On top of that, his success with the “Sherlock Holmes” films showed his box office strength outside the MCU, and with his Marvel contract set to expire, studios were hungry to attach him to IP that could yield blockbuster riches.

And though “Cats” and “Dolittle” have made this winter a tough one for Universal, it hasn’t all been bad news. The studio has a strong chance to earn their second consecutive Best Picture Oscar winner with the DreamWorks World War I film “1917,” which has earned critical and audience acclaim and has been deemed the current frontrunner after winning the top prize at the Producers Guild Awards.

That success has spilled over to the box office, where “1917” has grossed an estimated $81 million in North America so far, including $27 million on this extended Martin Luther King Jr. weekend. “1917” is on its way to becoming Universal’s first hit of the decade with $143 million grossed globally so far against a $100 million budget and several weeks left in its theatrical run.

Universal, which declined to comment for this story, will try to rebound next month with a low-budget Blumhouse adaptation of “The Invisible Man” before a Q2 that includes international distribution of the James Bond film “No Time to Die” and the ninth “Fast & Furious” film. A sequel to the billion-dollar animated hit “Minions” is also on their summer slate.