Evolution Of Google And How It Affected SEO

Through the use of algorithms, Google is changing the way SEO works. SEO (search engine optimization) is one of the best ways to attract organic traffic to your website, drive leads, and increase your online visibility. Google’s algorithms are very complex and secretive so that no one knows how the SEO works. You can find things that have worked this year, but will not work the next. And you can certainly find things that have worked in the past, will not work in the present, but will work in the future. It’s safe to say that Google’s algorithms change with each new update.

Google has come a long way and has become a Global brand ever since. The vast majority of web users use Google’s very own search engine, Google Chrome.

In this article, we are going to talk about the evolution of Google, its algorithms, and how it affects SEO.

Google makes thousands of small updates to its algorithms each year. However, there are a handful of updates that are quite notable, to say the least. Those are:

Below we will talk individually about some of the key evolutionary points that have directly affected SEO. 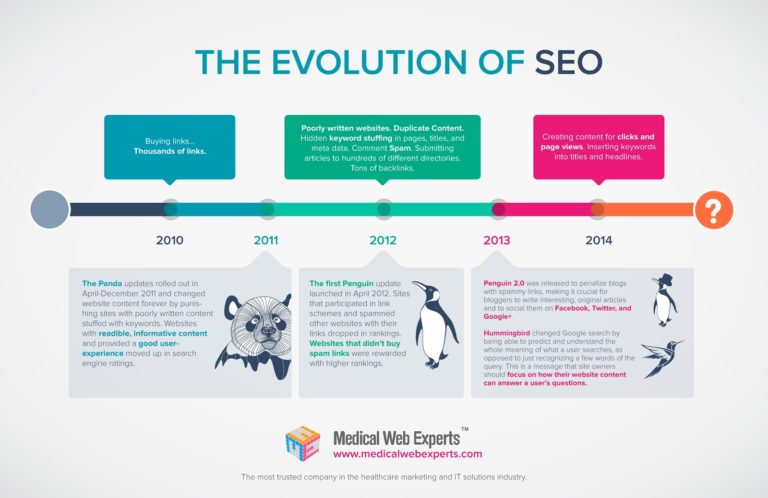 Vince update was a noticeable update that made a change in competitive keywords. Previously, ranking sites for specific keywords were less authoritative sites, affiliate sites, and sites that won the SEO battle. With the roll of Vince update, we saw big brands and certified sites rank higher.

The Panda update was huge, at the time, for Google as it spans out from February 2011 all the way to 2016, with the full incorporation of the Panda Core Algorithm. The Panda update completely changed the way the SEO worked. The previous method of content farming was not obsolete and a more effective way of ranking was introduced. This update alone impacted 12% of all queries. By the end of Panda Core Algorithm Incorporation (4.2), it was fully incorporated as another core ranking signal.

This update was focused on scammy websites such as payday loans that were taking part in shady industries. It also included sites that practiced debt consolidation, pharmaceuticals, casinos, etc.

There are many more updates that went on to impact SEO on both the global and local levels, and you can write an article on its own for each and every algorithm update.