I miss having Ronaldo in La Liga – Messi 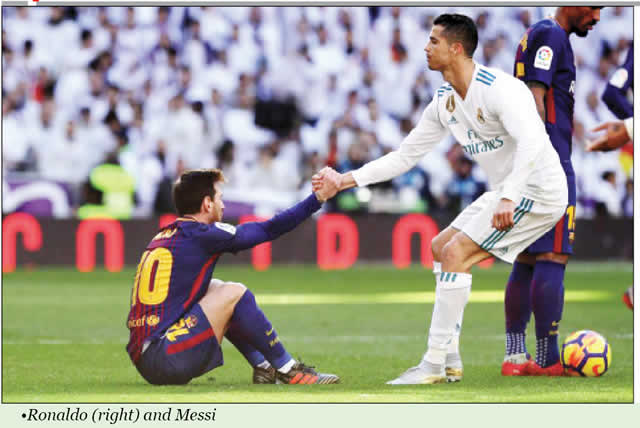 Ronaldo has continued to save his best for Europe’s elite club competition, with a hat-trick against Atletico Madrid firing Juve into the quarter-finals of the Champions League.

The draw subsequently ensured Messi and Ronaldo cannot meet unless both clubs advance to the final, which is set to be played at Atletico’s Wanda Metropolitano home, according to Goal.

Madrid are lagging 12 points behind Liga leaders, Barca, and Messi suggested he misses the competition provided by Ronaldo.

“I miss Cristiano,” Messi told FM Club 947 in Argentina. “Although it was a bit difficult to see him win trophies, he gave La Liga prestige.

“Juventus are a great candidate to win the Champions League since the arrival of Cristiano, and the match against Atleti must have given them a lot of confidence.”

Messi and Ronaldo are widely considered to be two of the greatest players to have ever played the game.

But the Barcelona captain feels team-mate Luis Suarez should be considered among the best of the rest.