Heartbreaking: Boyfriend Faints After His Girlfriend Got Crushed To Death By BRT Bus In Lagos

Home/Others
07, Feb 2019 390 Comments 89995 Views
A young girl has been crushed to death in Lagos state, sparking serious sadness among family and friends. 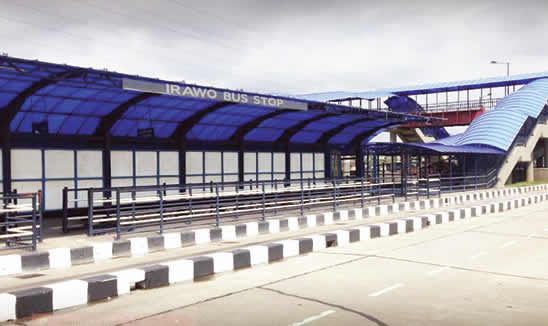 According to a report by Punch Metro, a Bus Rapid Transit vehicle belonging to Primero Transport Services Limited knocked down 18-year-old Adanne Isaac and killed her on January 27, 2019.

It was gathered that Adanne, who had gone to grind pepper somewhere around the Irawo bus stop, was on her way home to change her clothes that were stained by pepper when one of the BRT buses plying the route knocked her down as she attempted to cross the dedicated BRT lane.

It was learnt that the driver of the bus fled the scene of the accident when some angry people, who were pained by the loss of life, descended on the bus and attempted to set it ablaze.

Adanne’s lover, Daniel Ondor, who said he spoke to the deceased earlier that day, added that he fainted when he got to the scene of the accident and realised that Adanne  was the victim.

The Benue State indigene stated, “I was home when she called me that she wanted to follow her aunt to the church. When they came back from the church, she informed me that she needed to cook for her aunt. So, she went to grind the pepper and in the process, the pepper poured on her clothes and that was what made her to decide to go back home to change her clothes.

“She was on her way home for the change of clothes when the BRT bus knocked her down as she attempted to cross the road.

“Immediately the accident happened, the driver abandoned the bus and ran away. People around the accident scene took her phone, found my number stored on it as ‘My Love’ and called to inform me to come to the scene to identify her body. And when I got there and found out that the corpse was that of my girlfriend, I fainted.

“What I saw was very bad; the bus had tore her into pieces and till date, I am still in shock. I really sympathise with her family and Ì have been with them until they will take her remains to the village.”

An eyewitness, Joshua Ajagbe, said the incident caused gridlock on the road, adding that residents of the area and passerby, who were annoyed by the accident, took advantage of the situation to attack BRT buses.

The deceased’s stepbrother, Martins, said the management of Primero Transport Services Limited had contacted the family, offered assistance for the burial arrangements of the victim and promised insurance compensation after the burial.

“When we got there, the police called the management of the BRT firm and the representatives came. They promised that in line with the company’s policy, they were going to assist us to take her corpse home. So, they gave us N200,000 for the burial arrangements and also promised to compensate us from the insurance cover after the burial.

“We have informed our parents and our plan is to take her remains to our village in Ebonyi State. I feel very bad; her death was very painful; she was 18 years old and just finished her secondary school education.”

The Chief Security Officer, Primero Transport Services Limited, Cletus Okodolor, while commiserating with the family of the deceased, said the driver accidentally knocked down Adanne, who had crossed the BRT corridor without looking properly.

Okodolor said, “What happened on that fateful day was that the girl was trying to cross the BRT lane but didn’t look properly; the bus driver said he never anticipated it. So, as he was driving, the girl suddenly entered the lane and it was too late to avoid her, because of the proximity of the bus to the deceased. That was how he knocked down the lady; he even climbed over her to tell you the distance between the victim and the bus.

“The driver immediately abandoned the bus and ran away for fear of being lynched by the angry mob that had gathered. So, we quickly got in touch with the police and they went to the scene and cordoned off the area because of the ensuing tension, and protected the bus from being burnt, because there was an attack on it.

The state Police Public Relations Officer, CSP Chike Oti, who confirmed the accident to our correspondent, said the command had commenced investigation into the matter.

Oti stated, “The police are investigating a case of fatal accident involving a BRT bus and an 18-year-old girl who attempted to cross the BRT lane but was unfortunately hit by one of the BRT buses.

“After the accident, an angry mob descended on the BRT bus and attacked other BRT buses, but the quick intervention of the police from the Owode Onirin Police Station brought the situation under control.

“However, the command has commenced investigation into the events that led to the accident, which caused the death of the teenager.”