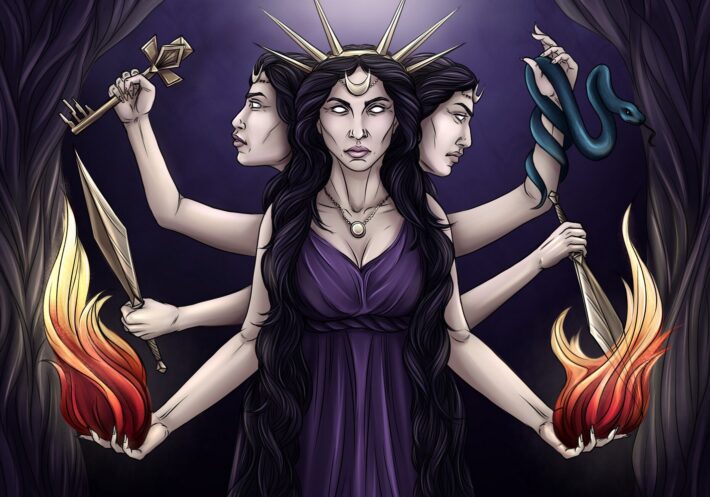 Hecate is a goddess of Greek religion and mythology of antiquity, In Greek vase paintings, Hecate is usually depicted as a woman with twin torches, usually in the form of a goddess of fire. She carries a key to the spirit world on her belt and is accompanied by a three-headed dog surrounded by burning torches. In later times the goddess is represented in three forms and is associated in many ways with witchcraft and other forms of magic and necromancy.

She is also known as the goddess of the moon and light, of purification and atonement, knows about herbs and poisonous plants, and has many titles. In writings over the centuries, she was woven into the mythology of the ancient Greeks as the goddess of love, compassion, and love for animals.

A statute from the 8th century BC showing Hecate with wings and a snake in her hand, and a statue of her with a snake in her arm in the middle of a field. Patriarchal civilization may have taught us to fear this figure of a terrible hack, but if we trust in her age-old energy, we will find her as a kind protector. It refers to us as if we had the key to the dark realm in our hands and carried a torch to illuminate the way into the depths of our inner being. 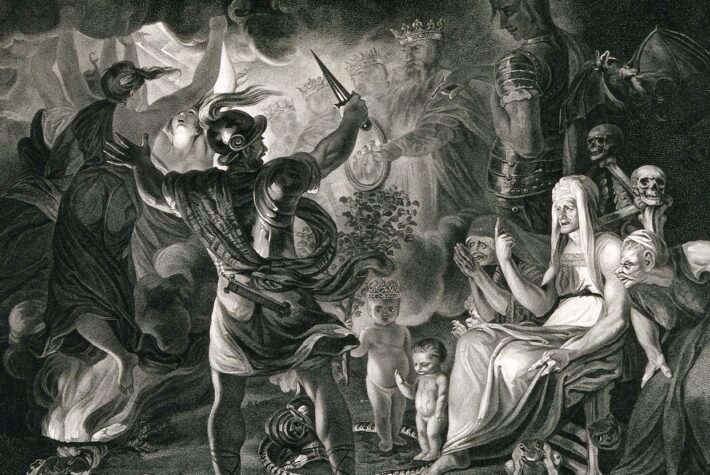 In this capacity, she is described as a ruler over the souls of the deceased and accompanied by a stylized dog. This idea seems to have been generally current in later writers, but it also wandered through the soul – dead and announced by the whining and howling of the dogs as it approached.

In the 5th century BC, the goddess was associated with a being that roamed in the darkness of the night. While a sculpture shows her with a friendly dog, some scholars attribute this depiction to the darker side of her. Most poets make Hecate the daughter of the night.

Her familiars are the black dog and a polecat. The black dog was once Queen Hecuba, who leap into the sea after the fall of Troy. Hekate turned her into a black dog to save her life and then made Hecuba her familiar.  The polecat has two origins. The first being of a great witch named Gale, who was punished for her incontinence by being turned into a polecat but Hecate felt pity and kept Gale by her side. 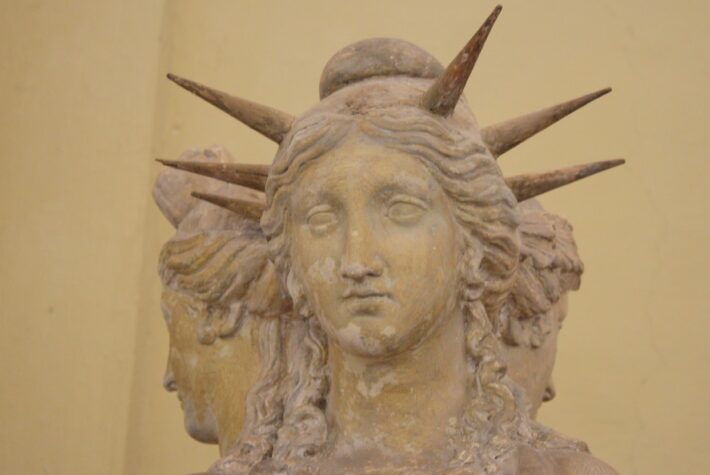 The other version of Gale myth being that when Alkmene was giving birth Hera told Eileithyia not to release the birth. However her nursemaid Galinthais saw Eilithyia and yelled “The baby has arrived!” Eileithyia was shocked and lost her focus allowing the actual births to occur. When Eileithyia realized that she had been tricked she turned the nurse into a polecat or weasel. Hekate however took mercy on Galinthais and made her an attendant.

Hecate is a wise goddess who often helps the gods in their war against the giants and is by some considered the smartest of all goddesses. This role is further strengthened by the fact that she is one of the goddesses mentioned in the works of Aeschylus and other ancient writers, as well as in Plato’s work. This makes her not only a powerful goddess of magic, sorcery, and necromancy but also a protector of women and children. The people of the earth called upon Hecate as they sought atonement by offering beautiful sacrifices according to custom.

Sacrifices were made in their honor in the classical Greek period ranged from cakes and eggs to dog meat although it is said she prefers: pomegranates, lavender, dishes with garlic, date palms, eggs, honey, pieces of bread, and sweets that are crescent-shaped, candleflame and incense. In ancient times, Hecate’s devotees left offerings to her and her hounds outside by their door. 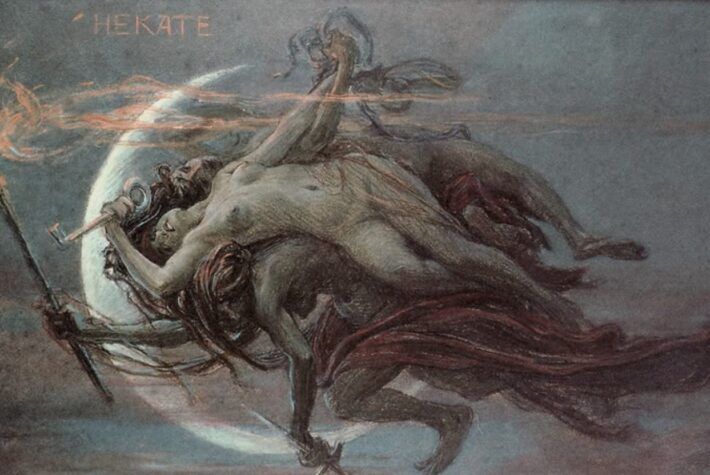 Known for her divine wisdom, Hecate helped Demeter in the search for Persephone after Hades kidnapped her and took her to the underworld by leading the sorrowful mother goddess through the night by the light of her twin torches and when it was decided that Persephone would spend a third of a year in the underworld and the rest on earth, Hecate became not only her attendant but also a close friend of Persephone and her companion to and from the underworld each year.

Hecate is known for her unusual powers and connection with the twilight, and a goddess who rules over the earth, sea, and sky. Known as the “witch” for her unusual power, association, and twilight and while she is known for her ability to heal her sacred plants were the yew, and a number of poisonous plants such as aconite, belladonna, dittany, and mandrake. Sources say there was a sacred garden dedicated to Hecate at her temple in Colchis. This garden would have contained her sacred trees, herbs, and poisons.

Hecate is the Mother of Witchcraft, the Queen of Sorcery, and the Goddess of magic she is a favorite among modern and past witches, according to mythologysource.com.  The star Sirius is her sacred star and many try to locate Sirius, the Dog Star, in the night sky. She was the triple-faced goddess of the crossroads whose familiars were a black dog and a polecat – an animal much like a ferret. She is frequently depicted striding through the night holding two torches and worshipped at the 3 streets where 3 of these streets meet and she is worshipped during the day. Accompanied by a group of people who are considered social outsiders, they undertake the nocturnal journey and travel at night. 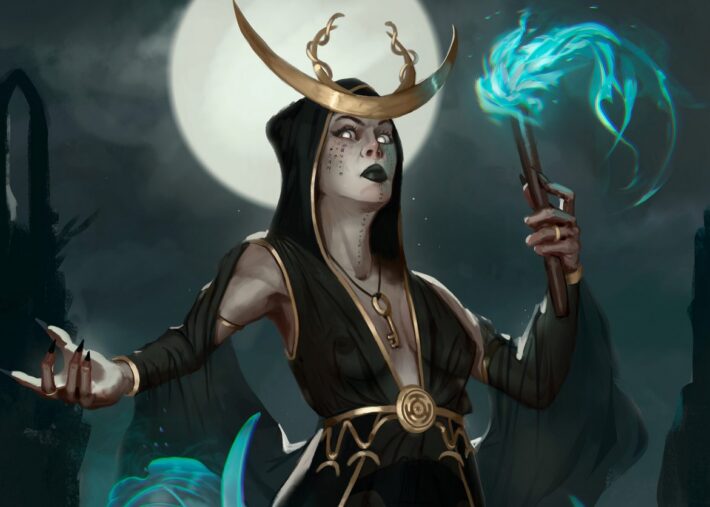 The Goddess of Witchcraft’s sacred number is thirteen when many want to honor her its custom to perform rituals in thirteen steps, or involving thirteen repetitions. Some examples would be: do a ritual on the 13th day of each month, Repeat a prayer every time the clock hits the 13th minute of the hour for thirteen hours. Offer thirteen flowers to her, or say your prayers thirteen times. 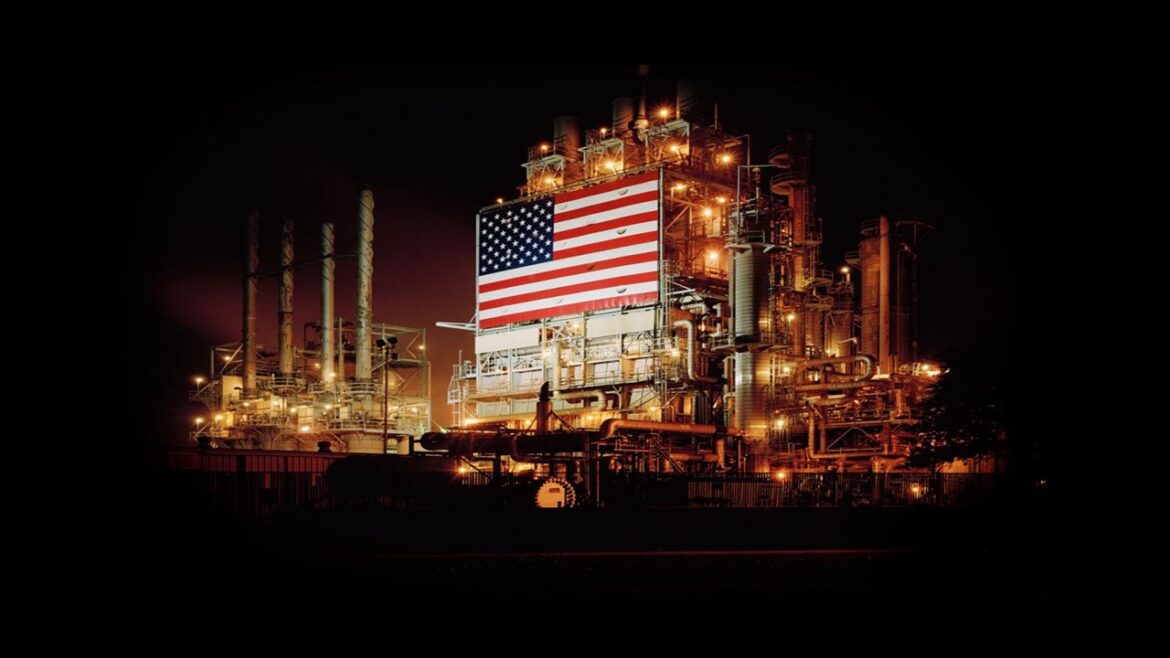 Gone are the days when Saudi Arabia was the largest producer of oil in the world. Today, the...…

Brain injuries are unfortunately a common occurrence. It’s estimated that nearly a quarter...…

Safety should be your primary concern when you live at home with your...…

Writing content for others is difficult at best. Here’s how to do it...…

How Wearing Jewelry Increase Your Confidence?

Whenever we go out to any place, we dress accordingly. Carrying the perfect...…

7 Best Bitcoin Exchanges in the United States in 2021

Cryptocurrency trading can appear to be risky and intimidating, especially if you are...…